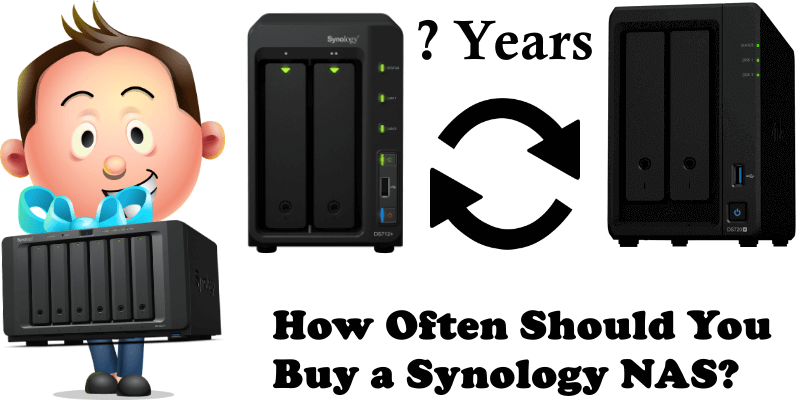 A lot of people have contacted me recently asking me how often they should change their Synology NAS. Many boast that their NAS is still fully functional after 7-8 years of use, but then complain that some new software produced by Synology such as Synology Photos does not support, for example, facial recognition and only newer and more powerful models support it.

Similarly, others say: ‘My NAS is from 2012-2013 and has always been slow but I got used to it’. If your NAS stores a big chunk of your life and is full of memories of all kinds, why not invest in a new one so that all those memories you’ve so diligently collected for years can be handed down to your kids and grandkids one day? Really, a NAS is not quite like a washing machine, that you can hold onto for as long as it works; a NAS is more like a time machine.

My recommendation is to change your NAS every 5 YEARS. Most NAS devices have a 3-year warranty. You can extend this warranty for another two years by purchasing an Extended Warranty for some specific models.

Here are 7 signs you need a New Synology NAS

Typically, upgrading RAM and switching to SSD disks are among the first steps in boosting NAS performance. However, you can’t upgrade the motherboard or the CPU.

Security is out of date

If your current hardware is incompatible with newer versions of an operating system, it may be time to buy a new NAS. Check the compatibility for DSM 7.

Your NAS fans are getting noisy

Often times the first issue to signal an aging NAS’ impending demise is the fan running loudly even when it’s not performing intensive tasks. Yes, you can replace it, but maintenance is critical as dust is very problematic for NAS components. In this case, you can use my dust Strategy.

Applications may take longer than usual to load on an old NAS. If you’re running the latest version of an application, old hardware may not be able to keep up.

You don’t have the newest version of DSM

Don’t neglect the basics when it comes to maintenance. Regularly update your NAS to the latest version of its DSM operating system. Each new version comes with security and operational improvements, bug fixes, and other tweaks intended to benefit the whole NAS ecosystem.

The NAS has multitasking issues

If your NAS has difficulty running two or more applications simultaneously, it might be time for a new NAS. When you can’t jump quickly between open applications, it’s a signal that your NAS is reaching its end.

Startup and shutdown are slow

If your NAS takes an extraordinary amount of time to boot up or shut down, it could be an indication that your NAS is on its last legs. It could also be that too many applications are set to load automatically and run in the background of the operating system whenever you start your NAS.