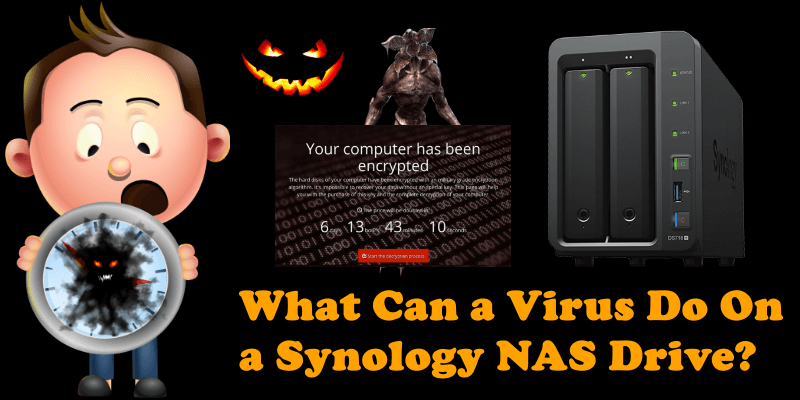 Depends on the NAS, the virus, and the computers being used. If the NAS is based on Windows, the virus would only have to get activated on the NAS for it to be able to do damage (it can potentially be activated via some SMB vulnerability, or via a malignant email). And once activated, it has access to anything the NAS has access to – and can communicate with any system the NAS can communicate with, thus infecting other workstations/servers/tablets/laptops/mobile phones …

But if the NAS, in our case “Synology NAS”, is based on a different architecture (Linux “DSM”) than what the virus was designed for – it can do nothing directly. Instead it has to depend on the NAS clients to carry out actions – and it would be limited by what the clients do (such as infecting other workstations/servers/tablets/laptops/mobile phones …). The NAS itself may be immune, just acting as a “carrier” allowing the virus to spread.

Your Synology NAS is more at risk for Ransomware than a Virus.

What is a Virus? Viruses are malevolent programs that spread from one device to another through infected files and websites. Once your device has been exposed to a virus, it will install itself and run on your system without your knowledge. Viruses have the potential to corrupt your files and interfere with your device’s performance.

What is Ransomware? Ransomware is a sub-set of malware, rather a dangerous one, which is designed to target individuals or organizations. It’s a type of malware that allows the attackers to gain full control of your system and restricts access to the personal and confidential files unless a ransom is paid. It’s a lot more complicated than a regular malware and can present itself in one or many ways. It is a malicious program that locks up the system files and encrypts them, and demands a ransom from the user to unlock the system. What it basically does is lock you out of your system by preventing you from accessing your data either by locking the computer screen completely or encrypting your files.

Viruses are a type of malware. But, unlike ransomware, they don’t lock your files or demand a fee for their recovery. Instead, viruses corrupt your files, affect your device’s performance, and cause unexpected malfunctions. Most viruses propagate to your NAS via previously “corrupt” files already on your PC. My advice is to do a complete scan with a good antivirus for Windows if you are using Windows before uploading any files to your Synology NAS. Read more: Should I Install Antivirus Package On My Synology NAS?