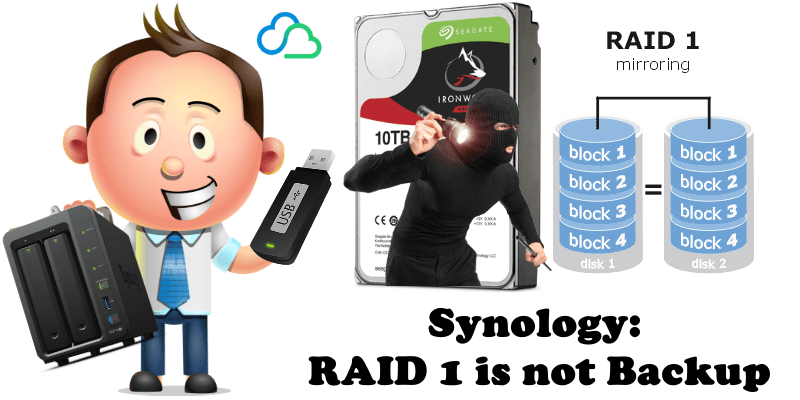 RAID 1 isn’t a substitute for backup because there are a lot of risks that it can’t protect against. For example, if you accidentally delete a file, it will instantly be removed from both mirrored copies. If your disk is corrupted by a software bug or virus, the corruption will occur to both mirrored copies simultaneously. If you’re hit by a strong enough power surge, it’ll probably fry both disks at the same time. If someone breaks into your house, they’ll steal your Synology Nas that holds both disks. If your house gets flooded or burned down, both disks will be ruined. RAID is not backup & backup is not RAID.

Note: RAID 1 will ONLY protect you against a hardware failure, NOT data corruption. To be clear, RAID 1 protects against hardware failure only. It does not protect against user error, natural disasters etc. Backups provide you snapshots of your data at any point in time in the past. Obviously, the more copies you keep in different locations, the safer your data is.

Note: RAID 1 is not a substitute for a backup, but it can be used as a system for backing up. To make a backup, remove one of the disks and replace it with a blank disk. The disk that you removed becomes your back up and the new blank disk will be mirrored thanks to the first disk.

Note: A local backup is not a complete solution – you are still vulnerable to floods, fires and theft because, chances are, whatever disaster may affect your main box, it will affect the backup device too.

Note: Snapshot Replication is not a Backup!