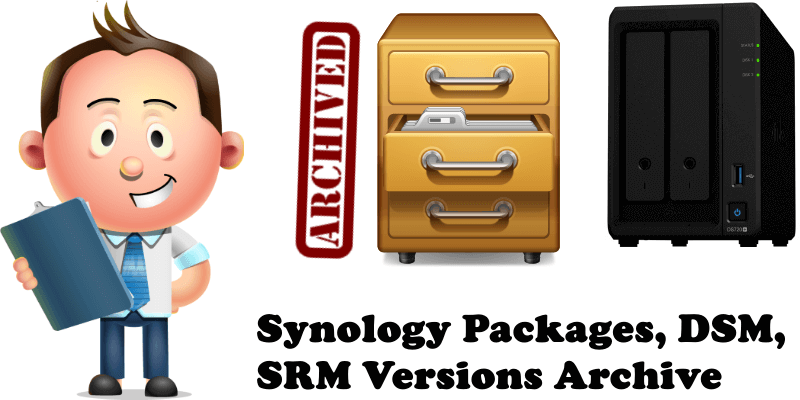 In today’s article I wanted to inform you of the existence of some Synology archives where you can view and download both old and new versions of Synology packages, or old and new versions of the DSM or SRM operating systems (newer versions appear in the archive before their official release). I used these archives often, for example, to see if new PHP versions were out, if there was nothing official yet available in the Package Center interface. I was able to download and install the new versions manually on my NAS without having to wait for the official release.

What is a .PAT file? It’s a system file extension used by DiskStation Manager (DSM or SRM), the operating systems used for Synology NAS devices and routers; it contains the files required to install or update the low-level operating system software that runs the devices; it can be used from the DSM Control Panel by choosing “Update & Restore” and then the “DSM Update” option. If you have a Synology router, it can be used from the SRM Control Panel by choosing System then “Update & Restore” and then the “Manual SRM Update” option.

What is a .SPK file? It’s a file extension for the installation package used by DiskStation Manager (DSM), an operating system developed by Synology for use with their NAS devices; it may contain programs or other software components that extend the base DSM software; it can be installed using DSM’s Package Manager.

Note: Older DSM and SRM versions can’t be installed if you have a newer version already installed.