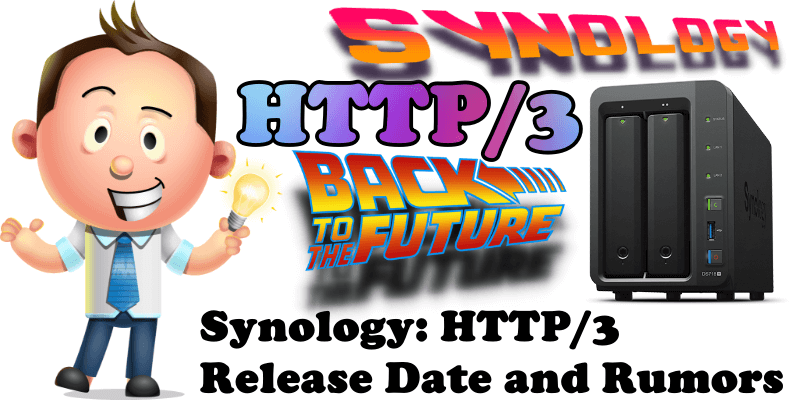 Yesterday I decided to take a leap into the future with my time machine and I returned to our era today with a fantastic piece of news. After talking to the oracle who offered me delicious cookies, I learned that in the coming years we could see HTTP/3 on our Synology DSM 7.X operating system. Currently Synology has a working HTTP/2 standard. In November 2018, the Internet Engineering Task Force (IETF) met in Bangkok (Capital of Thailand), and a new Internet-Draft was adopted. The QUIC transport protocol, an HTTP/2 successor, was renamed to HTTP/3. HTTP/3 builds on UDP, and is already being used by prominent Internet companies such as Google, Facebook and CloudFlare.

What is QUIC? HTTP/3 was initially known as HTTP-over-QUIC. Instead of using TCP, HTTP/3 uses Google’s QUIC protocol. The QUIC transport protocol has several features that are desirable in a transport for HTTP, such as stream multiplexing, per-stream flow control, and low-latency connection establishment. HTTP/3 is more of a rewrite of the HTTP protocol. HTTP/3 also includes TLS 1.3 encryption, so there’s no need for a separate HTTPS that bolts security onto the protocol, as there is today and this means no more slowness.

HTTP/3 is coming to other software, too—for example, the Nginx web server is working on HTTP/3. Read more: Nginx version 1.21. One day, your web browser and the websites you use will start communicating over HTTP/3 instead, and the web will get better and better as more sites opt to use the HTTP/3 protocol. If you host your WordPress website from home, on Synology NAS, like me, you will notice an unbelievable speed increase when HTTP/3 is adopted by Synology.

In the next upcoming months Synology will update its DSM operating system to version 7.0 and for sure, when HTTP/3 will knock on the door, Synology will implement it. Obviously there is no official statement from Synology, but my futuristic predictions are almost “real” and something is moving behind the scenes.

Remember to follow this article because all the updates about Synology and HTTP/3 will be added to this post.