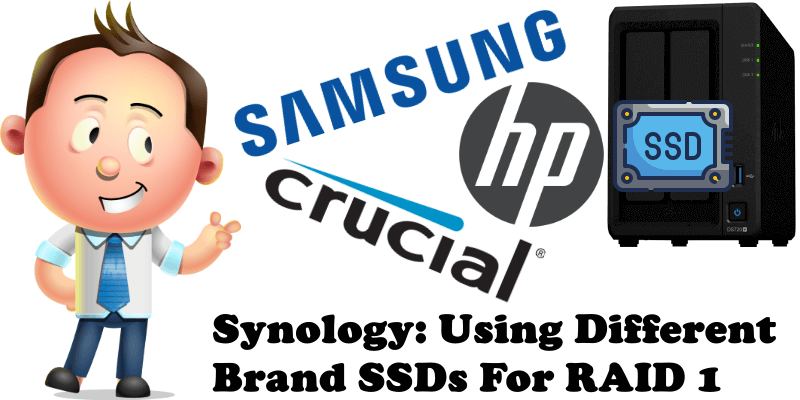 Those who have been following me for a long time know that I prefer to use SSD disks instead of HDD disks on my NAS. The reason why I like SSDs better than HDDs is because SSDs are totally silent, and also, I do not have that much data to save. Today, after 3 years and 9 months of uninterrupted use, my old Crucial MX500 SSD disks, which I had installed on my old DS718+ NAS in RAID 1, failed me. And it is also today that I learned two new and important things that I would very much like to share with you.

One of my Crucial MX500 250GB disks which was at 1% lifespan (monitored through my Synology NAS) went critical, but did not die. My other Crucial MX500 250GB disk, which was at 10% lifespan, died on me unexpectedly, without giving any signs of disk failure whatsoever. What did I learn from this experience? That a disk with 1% lifespan does not necessarily die before a disk with 10% lifespan. This goes to show there is no fixed rule when it comes to disks lifespan; but if more than three years of service have passed, you can expect an SSD disk to die on you suddenly, regardless of its lifespan.

Have you ever wondered if you can use different brand SSDs for your RAID 1 configuration on your Synology NAS? Today I wanted to experiment with this and I have an answer: the answer to this question is yes, you can. You can use different brand SSD disks in a RAID 1 configuration on your NAS without any issues. The only real rule to stick by is to respect the disk storage space: if you had two 250GB disks in, you replace them with two 250GB disks – so same size both. You can’t put in one 250GB disk and one 240GB or 120GB disk. You can only do this if you are using SHR as your RAID management option.

Below are both disks I used for my RAID 1 configuration on my Synology DS718+.

I proceeded to repair the storage pool from the old Crucial MX 500 and, as you can see below, everything worked as expected: the new disks I put in are marked as healthy and my data is safe.

The results are in and RAID 1 with data protection works perfectly, even when you use disks from different brands.

Note: This post wasn’t about promoting the purchase of disks of different brands or recommending this as an option for RAID 1. The purpose was to show you that, if the need arises, you can use any disk brand you have available to replace a faulty disk or one that has died on you, but make sure that it has the same storage capability as the disk it’s replacing. Even disks of different brands get along, without any sort of errors, so your data is perfectly safe.
Note: RAID 1 writes identical data to all drives simultaneously. RAID 1 provides data redundancy.