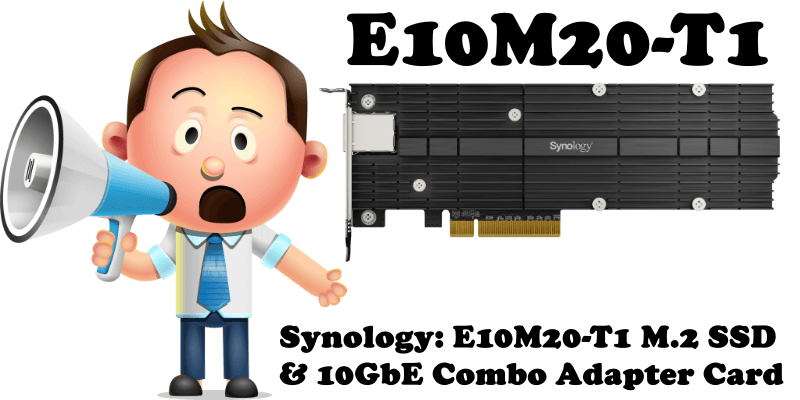 Finally, on June 12, 2020, Synology released the new E10M20-T1 PCIe card with 10GbE bandwidth and M.2 SSD cache, at the same time. Synology E10M20-T1 helps you boost I/O performance and network bandwidth simultaneously using just one PCIe expansion slot on your Synology NAS. Its strengths are summarized below in 3 points:

Synology E10M20-T1 is not the first PCIe upgrade card that Synology produced for their existing NAS users base. In recent years we have seen multiple NVMe upgrade cards released, with the latest being the M2D20 (featuring 22110 length NVMe SSDs too). The Synology E10M20-T1 brings together a huge degree of the hardware available in both of these categories and combines them into this top-of-the-game card. However, I’d say it’s not quite perfect because, for example, I prefer two network ports instead of just one.

Which Synology NAS models and SSDs are compatible with the E10M20-T1 PCIe Card?

🧡 Please Support My Work With a PayPal Donation.