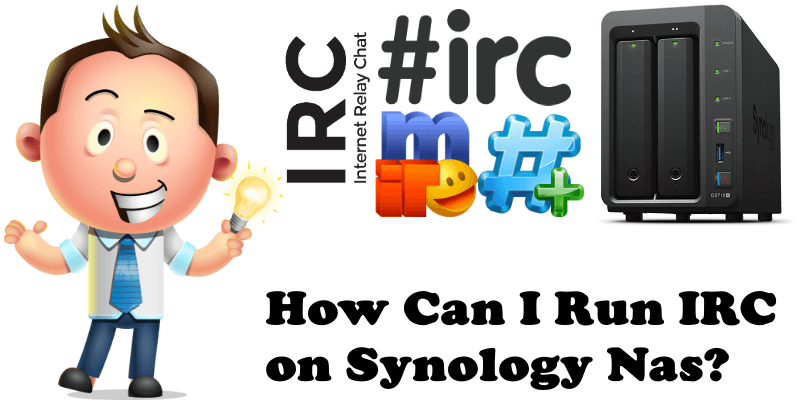 Can you run IRC (Internet Relay Chat) on your Synology NAS device? No, you can’t, and here are the reasons why. First of all, there’s no .spk client for Synology NAS. And really no interest from Synology management to develop something like this. It’s kind of sad, isn’t it? A long time ago, in the 90s, my generation was using IRC programs like mIRC on Windows and XChat, KVIrc on Linux. And we were ecstatic. Times have changed and now people would rather be on Facebook, Twitter and other social media. People have simply lost interest in IRC.

UPDATE 27 September 2020: How to Install IRC Client on Your Synology NAS.

Internet Relay Chat (IRC) is an application layer protocol that facilitates communication in the form of text. The chat process works on a client/server networking model. IRC clients are computer programs that users can install on their system or web based applications running either locally in the browser or on a 3rd party server. These clients communicate with chat servers to transfer messages to other clients. IRC is mainly designed for group communication in discussion forums, called channels, but also allows one-on-one communication via private messages as well as chat and data transfer, including file sharing.

Client software is available for every major operating system that supports Internet access. As of April 2011, the top 100 IRC networks served more than half a million users at a time, with hundreds of thousands of channels operating on a total of roughly 1,500 servers out of roughly 3,200 servers worldwide. IRC usage has been declining steadily since 2003, losing 60% of its users (from 1 million to about 400,000 in 2012) and half of its channels (from half a million in 2003).

Can we expect it on Synology NAS in the future? It would be nice to be able to create your own IRC Server directly on Synology NAS. But honestly, why would Synology be motivated to support something that generates less and less interest with each passing year? To make a handful of nostalgic Synology users like myself happy? Well, that isn’t very business savvy.